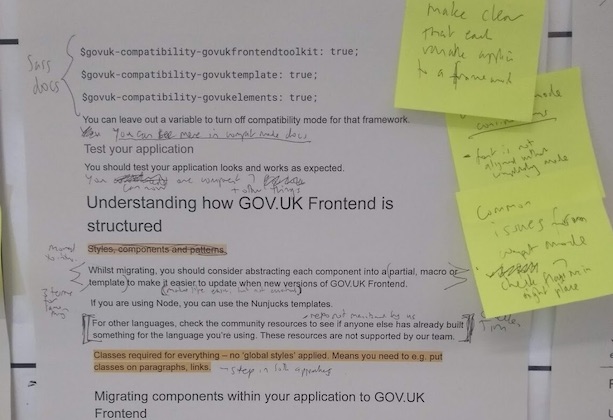 Earlier this year, I spent a quarter working with the rest of the GOV.UK Design System team at Government Digital Service (GDS) on improving documentation for developers using GOV.UK Frontend.

Moving to the Technical Documentation Template

We felt this was not meeting developer needs because:

We’ve now moved the documentation to GDS’s Technical Documentation Template, which had been tested to meet developer needs and was already being used by teams in GDS and across government.

Our main documentation about installing GOV.UK Frontend is now organised into:

Our documentation on installing GOV.UK Frontend is often the first experience developers have of using the Design System, so it’s really important we get it right.

Our user researcher designed and ran user research with developers at the Home Office and the Office of the Public Guardian, so we could see how well our existing install documentation worked for our users.

We asked them to add the button component from the GOV.UK Design System to a service, with the help of our existing install documentation. We moved the documentation into a prototype that used the Technical Documentation Template, so we could test that too. 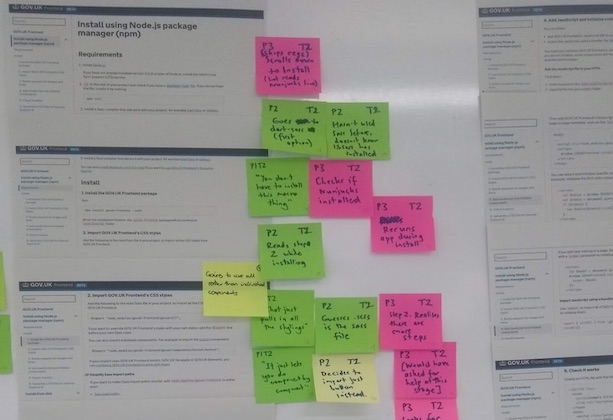 We analysed the research, and decided to split our one very long install documentation page into 3. This meant we could create a short, simple, step-by-step guide to getting started with a single component. It also meant we could more easily add documentation on how to check things were working after each step, to help developers using the ‘try then read’ approach.

We also tweaked our language to make it clearer that each step is essential. For example we now use:

One of our developers wrote a great first version of the guidance. Then I ran 2 one-hour workshops with our developers and user researcher, where we stepped through the content, line by line, and added notes on what to add, change or remove.

Finally, we took the iterated version into research with 8 developers. I was thrilled to see this documentation test much better than our old install documentation, and we heard comments like “Seems like a very nicely structured document” and “Feels written at the right level”.

As a result, the version you see today is practically unchanged from the version we took into research.

You can now read our Sass API reference, which documents all the:

Our developers did amazing work to auto-generate the Sass API reference with the help of the SassDoc tool. Our Sass API reference page is automatically built inside the Technical Documentation Template directly from comments inside GOV.UK Frontend’s actual Sass code.

You can read our new GOV.UK Frontend developer documentation. If you have any feedback on the new documentation, please leave a comment below.