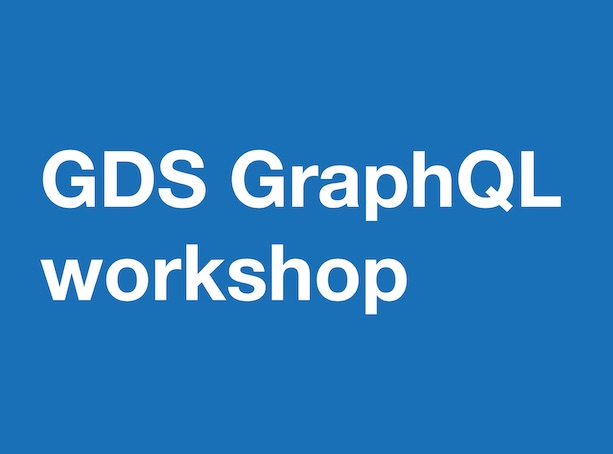 The Government Digital Service (GDS) recently hosted a remote GraphQL workshop for around 70 people from across government.

We looked at use cases and showcased some brilliant projects to explore more about when we should use GraphQL over REST API.

GraphQL is an open-source API query language and runtime for fulfilling queries with existing data.

Unlike REST APIs, where the server determines the data returned in each endpoint (which can result in clients over or under-fetching data), GraphQL lets API clients request and receive the exact data they ask for. API developers define the data using the GraphQL strongly typed schema and expose it through a single server endpoint called ‘/graphql’. Clients can then request data on a granular level with  queries and modify data with mutations.

From this, GraphQL can reduce the number of network calls and bandwidth demands on the server.

What we learned during the day

Since GraphQL became open source in 2018, HMPO and Home Office have endorsed its use for 2 API products to replace legacy APIs:

Catherine discussed how both products had increasing demands and evolving customer needs. There were some technical considerations to make sure:

Neeraj talked about important lessons they learned from their legacy APIs and common API challenges, including:

These lessons influenced HMPO to choose GraphQL as they identified that it could help overcome the challenges of past APIs, meet user needs and improve data sharing. HMPO used Apollo as its GraphQL implementation tool.

The DVA Digital API team used GraphQL to build an API that was:

The DVA Digital team concluded that GraphQL can be a steep learning curve but it is important that developers consider GraphQL as a new way of building APIs and always focus on user needs when choosing how to build their APIs.

TDR stores information about consignments and files in a relational database. The team wanted to build an intermediate component between the frontend and backend processing and the database. They explored different GraphQL approaches and considered REST before deciding to use Sangria, a GraphQL server. They chose GraphQL because they:

The team wanted to try something new and a small internal API was a safe place to experiment.

Some lessons they learned along the way were:

Previously, data and systems on ships could get locked up in individual silos, making it difficult to access and share. The Royal Navy built the NDP as a single point of integration so that an application could access data numerous times from one place without having to fetch data from multiple backend systems.

When choosing how to build their APIs, the team evaluated both REST APIs and GraphQL. They decided to use GraphQL because:

Chris discussed how GraphQL has helped build APIs that can cater for their wide user base who have varying data needs. For example, one user might need data on engine fuel rates whereas another user may only need data on engine tanks. With GraphQL, each user can query what they are interested in and receive only that.

The Royal Navy also used GraphQL Voyager, a tool that helps visualise your schema. For example, the Royal Navy used this to maintain a live radar feed so users could query data like ship location.This made it easier to share and discuss data with developers and senior stakeholders in a more interactive way.

The Royal Navy took a user-centered approach to developing a GraphQL API to better understand the use of fuel. They developed some user experience standards and collaborated with data teams to build the application.

Some important lessons the team learned along the way were:

What's on the horizon?

GraphQL can be a useful way to build APIs and use cases in the public and private sector are developing fast.

We are adding more guidance on GraphQL in our next iteration of the API Standards, focusing on the situations where GraphQL may be a suitable alternative to REST APIs.

Where possible, we recommend building RESTful APIs in our API standards, unless there is a clear user need to do otherwise. Developers should have a good understanding of how user needs interact with their APIs and make design decisions that support them in meeting their goals.

We’re hoping to see more teams experiment in the open like The National Archives.

To learn more and to share your work with us, you can get in touch with us on the API Standards group or leave a comment below. If you’re in the public sector, you can also join the #graphql and #apis cross-government Slack channels.